2. From children’s books to Icelandic horses 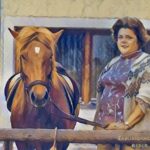 How the Reber family came to Icelandic horses – and what Dick and Dalli have to do with it.

“Believe it or not, my family actually came to the Icelandic horses through Ursula Bruns’ children’s books! What would become of it, however, was not to be foreseen at that time.

An own farm, an own breed, tournament ambitions and successes, all of this was not yet in the mind of my parents at that time. It wasn’t the way you might imagine it, either:

The little horse-enthusiastic girl falls in love with the ponies of her book world and whines until there is finally one with a big bow around its neck under the Christmas tree.

No, it wasn’t like that! It was my father who couldn’t help but dream of riding. But he had been fed up with breakneck rides on crazy horses for a long time and was still looking for a comfortable and safer alternative. One day he came across “Dick and Dalli and the ponies” which lay somewhere in the corner of my house and is known to many today in the film version The Girls from Immenhof.

He now wanted to know more about the funny little horses in the books. But where could you find information about them? He spontaneously sent a letter to the author of the book and asked her for information. And in fact, he soon had an answer in the post.

“They’re Icelanders,” he learned and got the tip:

“Have a look around at Walter Feldmann’s in Aegidienberg, he’s been breeding this breed for some time, there you might find what you’re looking for!”

Aegidienberg wasn’t exactly around the corner, but that couldn’t stop my father. He put us children in the car and the whole family went to the Rhineland on a weekend.

We drove a good six hours from our place in Wurz in Bavaria. The long trip was quite boring, but in the end it was worth it, because we found what we were looking for. When we climbed out of the car, we immediately saw horses similar to those in my books.

I don’t remember exactly how many there were, after all, this trip was about forty-five years ago, but there must have been a few there. From my children’s perspective – I was just seven years old and the youngest of us three – the Icelandic horse farm seemed big to me, but of course, it wasn’t in reality. One must not forget that we were only at the end of the 60s and Walter Feldmann sen, one of the pioneers of Icelandic horse sport in Germany, was still at the beginning.

Walter showed us around, showed us everything and explained something about the peculiarities of this breed. My father was especially interested in the comfortable tölt of these horses.

He was probably secretly looking forward to the relaxed rides he had been dreaming of for so long. Here, he seemed to finally get closer to his goal. Of course he tried some horses and finally decided for Stjarni. An appointment was quickly made when we could pick him up.

Not only my father, but also I was very happy about this purchase, because the Icelandic horses had conquered my heart immediately with this first meeting. Even though I loved our two shetties, I felt somehow: These horses here were something very special and I was already dreaming of one day being able to ride an Icelandic horse.

Soon afterwards we set off again to pick up Stjarni and bring him home. Now an Icelandic horse belonged to our family – and it should not remain the only one!! 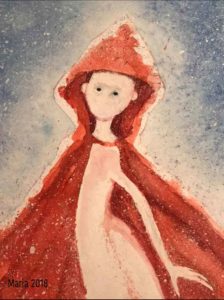