Jarpur was one of the biggest horses I have ever seen here in Iceland. But he was not only tall, but also strikingly beautiful.
He was very well proportioned, compact with a high shoulder and broad, muscular chest. His chest muscles were impressive and strong like a fist!

But what really distinguished him was his head. I have never seen such an expressive horse’s head in all my life.
I was not alone with my opinion. Many others who saw him also assured that they had never seen such a beautiful horse, with the exception of Sóti, the riding horse of Dr. Grímur Thomsen.

What I would like to mention: It may seem strange to some people that someone is enthusiastically devoted to the precise description of a horse’s appearance and physique. But I think that this is quite justified, because this is what also happens when people are blessed with a special physiognomy. The appearance of horses is as different as that of people, and there are as many beautiful horse bodies as there are human bodies.

Jarpur had a forward drive that was difficult for some riders to regulate. Nevertheless, even a woman could ride him for many days in a row and even hold a baby in her arms, because Jarpur knew exactly who he was carrying on his back and knew how to behave.

It is known that very wild horses become calmer when they are ridden with a side saddle. But that such a spirited animal becomes so agreeable when ridden by a woman, I find rather unusual. I believe that Jarpur always felt exactly when he had to pull back. (…)

Many adult horses, especially the older ones, enjoy the young, just as many people love children.

That is why we thought that Jarpur felt so comfortable in the pasture because he could be close to the foals there. But, when I think about it, he didn’t stay near them at all, he was usually standing close to a broodmare. – And there was actually a reason for this that we would not have dreamed of!

Once, when the herd was close to the house, we hid behind a hill to watch the foals playing. We could also see Jarpur moving towards his favorite mare.

What we saw now, we could hardly believe:
Jarpur got down on his knees and lay under the mare. The mare was small and Jarpur, as we know, very big. Obviously, he wanted to get at her udder – and already he started sucking on her. I think Jarpur was eighteen years old at that time!
Now we understood why Jarpur always wanted to be with the herd!

We couldn’t help but run to the horses, but as soon as Jarpur spotted us, he jumped up and ran away scared. Obviously he was ashamed. Since nobody had ever seen him suckle a mare before, we assumed that he had always done it secretly.

Obviously he felt that his behaviour was not appropriate, but he had always been given extra milk in the first years of his life, and he probably didn’t want to do without this extra portion.

Jarpur never had any problems finding food. Especially in autumn, when things got more cumbersome and he felt that he should have been stabled earlier, he searched the surrounding farms for hay. He simply stood outside the door in the morning when people got up, or even opened the barn doors on his own. He could actually open doors and even broke them open by force if he could not get in any other way.

Fortunately, the farmers did not get angry and did not punish him too hard for that.

When horses were fighting fiercely, Jarpur would intervene and settle the dispute. He approached the troublemakers calmly and in a proud posture – and immediately the brawlers ended their feud.
One could not think of a better companion, for he had an excellent orientation.

Since the example of Jarpur shows how smart a horse can be, one has every reason to suspect that he is not the only intelligent representative of his breed.

A good example of human arrogance is a Danish saying. To describe a person’s lack of intelligence in a particularly graphic way, it is said that he is “dumb as a horse”. The judgement contained in this saying that horses are stupider than other animals is wrong, which everyone who knows about horses knows.
For quite the opposite is true: in truth, the stupid one is the one who is not able to recognize the intelligence of the other.

The story has been slightly abridged and transferred from Icelandic as accurately as possible in order not to change its character.

A small note at the end:
Anyone who has only studied Icelandic history a little bit knows how hard the living conditions in Iceland were at the time this little episode was written. For many people, the horse was therefore inevitably a workhorse and helper in the struggle for survival which, as you might think, was therefore usually treated rather roughly. Þórarinsson’s story makes it clear that this is a sweeping judgement. His example shows that even at that time there were people who noticed and appreciated the beauty, intelligence and character of the horse. 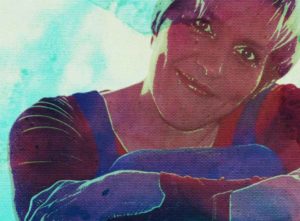 María has been drawing and painting since her earliest childhood. She studied art at Fjölbrautaskólinn í Breiðholti as well as Myndlistaskóli Reykjavíkur. Her whole life – professional and private – revolves around art.