The book of spells 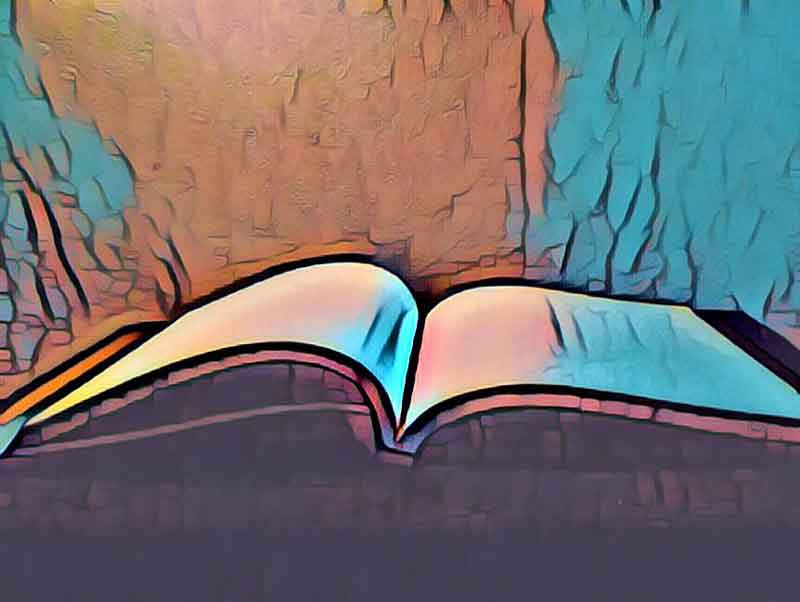 A young girl feels lonely and abandoned in the hectic urban life where everybody just goes about their own business. She makes a strange discovery in the attic of her house and a dream guides her to a world that will change her life.

It was a cold, grey November day. The rain was drumming evenly against the windowpane. The sky was grey. As grey as the fog that was hanging over the city for days and as grey as the bland life of the city.

Gwendolyn was living this life as long as she could think. One door and one window right next to the other. So many people, but there was not one of them she really knew. And so it happened that she was also alone on this grey November day, sitting in her room, listening to the rain drops.

Apart from the rain it was silent. But who should she have heard? Her parents were working and she had no siblings. She barely even knew her grandparents because they lived too far away. Too far to take away her loneliness on days like this.

For a couple of minutes, Gwendolyn hung on her thoughts. But then she pulled herself to the feet. She wanted to go to the attic where she was sure to find a few books that could help her pass the time.

To reach the attic, Gwendolyn had to climb a small staircase that creaked as if no one had used it for a hundred years. An overhead light gave her just as much light to see what she was holding in her hands.

She was rummaging around in the neatly stacked boxes for quite some time before she found something she did not recognize. It was soft but yet it was hard. It did have pages, but the pages were not printed on. Gwendolyn took a deep breath. Neither did she know what she was holding in her hands, nor what to think about it.

For a short moment she was holding her breath completely. Then, she collected herself. She decided to take “her treasure” to her room to take a closer look at it there. When she was climbing down the staircase, she felt her heart beating in her chest.

She put the thing on her desk and looked at it: It was unequivocal that it was a book. But it was not a normal book one could buy in the stores.

It was covered in pieces of fur and the font on the pages was written by hand. Now, Gwendolyn was grabbed by curiosity. She opened the book and began to read:

if you will ever read this book, enjoy it. But be aware of your task. If you read these lines there will be no turning back. Take my words seriously and learn from the story… form your story!

And this is my message to you, dear child: Turn the grey into an ocean of colors!

With love, your grandfather

Nothing else was written in the book: Neither in the front, nor in the back of it, no matter how long she was searching- nothing! Not a single line, not even a single word! She thought about this until her eyes were closed and she finally fell asleep.

A sudden jerk had awakened her and when Gwendolyn opened her eyes, she looked into the loyal eyes of a horse. She was startled! Where was she? Why was she lying on a green meadow? Under a horse! She let her eyes wander around and looked at a barren, green landscape with volcanic rocks and: horses!

Gwendolyn was a city kid and had never seen a horse up close before, but she had read enough about horse breeds to know that these were Icelandic horses.

They were small, sturdy animals that were as smart as they were safe in the fields, as she had read in the books, but a book and the reality are two different things!

“Where the hell am I?” Gwendolyn asked loudly, assuming nobody would answer. But she was wrong:

“We are in Iceland” she heard. The answer came from one of the horses. It was a beautiful black mare.

She was as black as the night and yet, she was beaming like the sun in the sky: “My name is Lukka, just as luck. You have not experienced much luck, yet! Yes, we know your story. All of us.

We are here to show you a new world. A world unknown to mankind. But you have to promise us one thing: Everything we show to you is only meant for you alone. You cannot tell anyone about it.”

Gwendolyn nodded, confused, and got on one of the horses. It was a check mare. She was not as beautiful as Lukka, but gentle like a mother or a big sister. The mare carried her for a long time through the overwhelmingly beautiful landscape of Iceland, the herd accompanied her.

Everything moved past her like a movie. They passed a waterfall whose noise sounded like music in their ears and whose waters shimmered in a thousand colors.

They rode past sheep, of whom there were so many that she could not have counted them. They also met the shepherd in the midst of his flock, whose music on the flute hid an infinitely sad story in a happy melody. They rode on and on, but suddenly they stopped.

They stood in a clearing in a small forest. The horses lined up in a circle and cleared a small alley. They began to make sounds that probably no one had heard from an Icelandic horse before. Gwendolyn first looked at Perla, an old grey mare, and then at Lukka, questioningly, but they did not let themselves be confused.

They did not stop until they heard softly whispering music from the very back of the woods. It was not long before she saw a train of little figures. She was not sure at first, but as they approached, Gwendolyn knew who these characters were: They were trolls, elves, and wizards.

And suddenly it became quiet. One of the elves sat on a beautiful horse. Her limbs were so fine and yet so beautiful. She started to speak and her voice was surprisingly loud and strong in terms of her height:

“My dear friends … There’s only one reason for us to be here today.” She looked around and her gaze caught Gwendolyn’s eye. She continued, “Today, we have included a human child in our circle. Her name is Gwendolyn and she is here because we want to share with her what has been given to us in abundance: On the one hand our beautiful country and on the other the happiness that keeps our hearts alive!

We want to share both with her! She should return to her world with a happy heart and many happy memories! But first we want to ask her for something. “

All eyes looked alternately at the queen of elves and Gwendolyn. Gwendolyn would have done anything to give something back for that fantastic moment she was about to experience.

She had been here for such a short time and already felt like she was part of a family. She hoped so much that she would be able to fulfill the request!

“We ask you for a strand of your hair.”

The queen of elves spoke in such a delicate voice that one had to fear the words might break, but then she continued in a steady voice:

“We ask you for it, because the strand of the hair of a happy girl is the strongest protective wall for us. It protects us from the people, but also from evil mythical creatures, because many hundred years ago, it happened that all mythical creatures gathered exactly in this place.

A wise council was formed, wondering what would be best for this world. It was agreed to share happiness with all the unfortunates. Everyone agreed, except for the troll of the icy mountain.

He opposed the wise advice and cursed us” the queen of elves said sadly. “Since then we collect every human hair and keep it carefully and …”

Before she could finish her last sentence, Gwendolyn had already reached for a sharp stone and cut out a strand of her blond hair. She handed it to the queen who accepted it thankfully.

Gwendolyn bowed her head and the queen of elves mumbled something she did not understand. Then she turned away and flew galloping on her white horse deep into the forest. All other mythical creatures followed her.

Gwendolyn approached Lukka. The check mare had already brought her here and should rest now.

They both knew it was time to say goodbye. Gwendolyn was about to open her mouth, but Lukka knew another way of saying goodbye.

She gestured Gwendolyn to sit on her back and did so as gently as she could. Gwendolyn held her hands in Lukka’s mane and as soon as Lukka felt she was safe, she started moving.

At first they took a step, but then they flew across the plain in tölt. When Gwendolyn felt the wind in her hair, she felt light, free and infinitely happy, yes, she suddenly understood the saying: The happiness of the earth lies on the backs of the horses. – And she felt that the magic of that moment would never let her go!

Suddenly a jerk went through her body and she was sitting on her chair in front of the book again.

The only difference was that the pages were filled, as if by magic. They were filled with their story!

The letters told how the Icelandic horses had given her luck. Her eyes filled with tears, but they were no more tears of sadness, but tears of happiness!

Judith Papenfuß wrote this story as she was 13 years old.