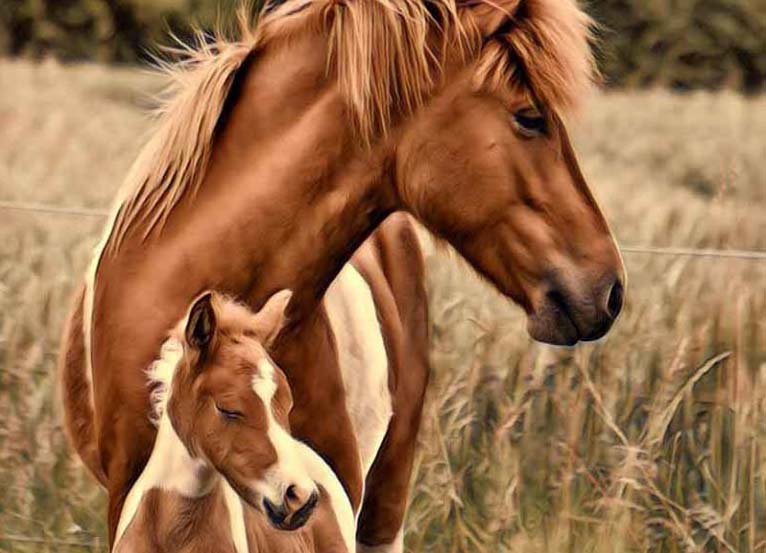 A mare with foal at foot- natural sight in spring which usually triggers cries of delight from the observer.

For the colt this story is about, however, the situation is anything but normal, even if at first glance, there are no signs of it. The mare that suckles him is the same color as he is and nobody would suspect that she is not his biological mother, not even closer related to him.

The little stallion was born on the fifth of June, the stork was still standing next to him in the pasture when we were allowed to greet him. He was a Pentecost foal.

His mom was an old and very experienced broodmare, his dad was our self-bred elite stallion. The little one was a chic foal, chestnut pinto, who looked very similar to his father at that age.

He was already very big when he was born and he developed magnificently. He liked to play with his half-brother. Like the older stallions, they roamed the pasture.

With his four weeks he was already very independent and curious. A full sibling was on the way, his mother was pregnant again.

And then, the day came when everything changed. His mom suddenly felt bad. We brought her and the little one in right away.

In the evening, her condition worsened dramatically, so that he could no longer drink from her. The mare could only lie down and was too weak to get up.

Then, she got a little better. Was there hope?
But she was not allowed to get better. With the support of the vet we fought for two days and two nights for her life, but in the end she had no more strength to stay with us.

The little boy missed his mummy – and above all, he was hungry! Fortunately, he was already so strong for his age!

What next? We put him with our other broodmares. They all had a foal at foot.

They were, however, not very enthusiastic about the little nagger and fended him off permanently. – The little one was still too young to survive on his own, he sought contact with us or with an old foalless mare that we gave him as a mummy substitute.

He also immediately tried desperately to suck on her, but of course nothing came. That’s why we gave him foal substitute milk, but he regularly choked while drinking, so we were afraid he would get pneumonia.

At the same time we searched the internet for nurse mares, but initially no potential mother was found. Until one evening we finally got a call!

An acquaintance had told someone about our search, whose mare had had a twin stillbirth in the morning – a traumatic experience for the animal.

Maybe the grieving mother mare would accept our foal?
The owner offered us to bring the foal to her.

The same evening we drove to her place with the little one and an accompanying horse. – Would the trip be worth it, or was it just another stress factor for our orphan?

The mare was very excited. She had just lost her foals – and our foal was much older, already four weeks old. On the other hand, it was also an enormous chance for both of them!

If it works out, our little one would get the chance to be raised naturally by a mother, and the mare would perhaps be able to overcome her loss better.

The reunion of orphan foal and nurse mare does not have to work immediately, it needs a lot of patience and the ending is open.

The different stable smell can lead to the mother not accepting the foreign foal.

So we tried to cover up the smell by drizzling strong smelling oils on the mare’s nostrils and on the foal’s back.

Nevertheless, for the time being, the little one was only allowed to drink when the mare was held. A great team on the farm took over the job of making sure that he was allowed to drink regularly.

Foals need milk at least every two hours. When they are older, the distances can be increased a little, which is a great relief for the human helpers, especially at night.

It is important not to give up too quickly when the nurse mare initially fends off the foster child and wants to drive it away.

Luckily, we didn’t have to wait too long and the two of them actually got used to each other. After 2 days we didn’t have to hold the mare any more so that the little one could drink, and already after 3 days he was even allowed to drink all by himself, to the relief of all!

Meanwhile the two have grown together to a small patchwork family, strangers would never suspect that mare and foal are not related.

The little one has found a wonderful substitute mummy. – Maybe it was fate? Because there are some similarities: His birth mother and his foster mother were the same color. One of her deceased foals was a pinto – just like her new, adopted foal.

The deceased mother of our problem child was a great mare, she had already given birth to eleven foals before him. She was good-natured, loving and patient.

She had put all her energy into her youngest foal until the very end, until she could no longer live on. She was one of the few horses in front of whom I could always lay myself flat on the ground, knowing that she would never step on me.

Like we promised her, we’re taking care of her little boy. And we will never forget her. When I see the little stallion with his new mommy, I know that it is worth the effort. 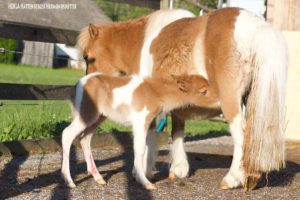