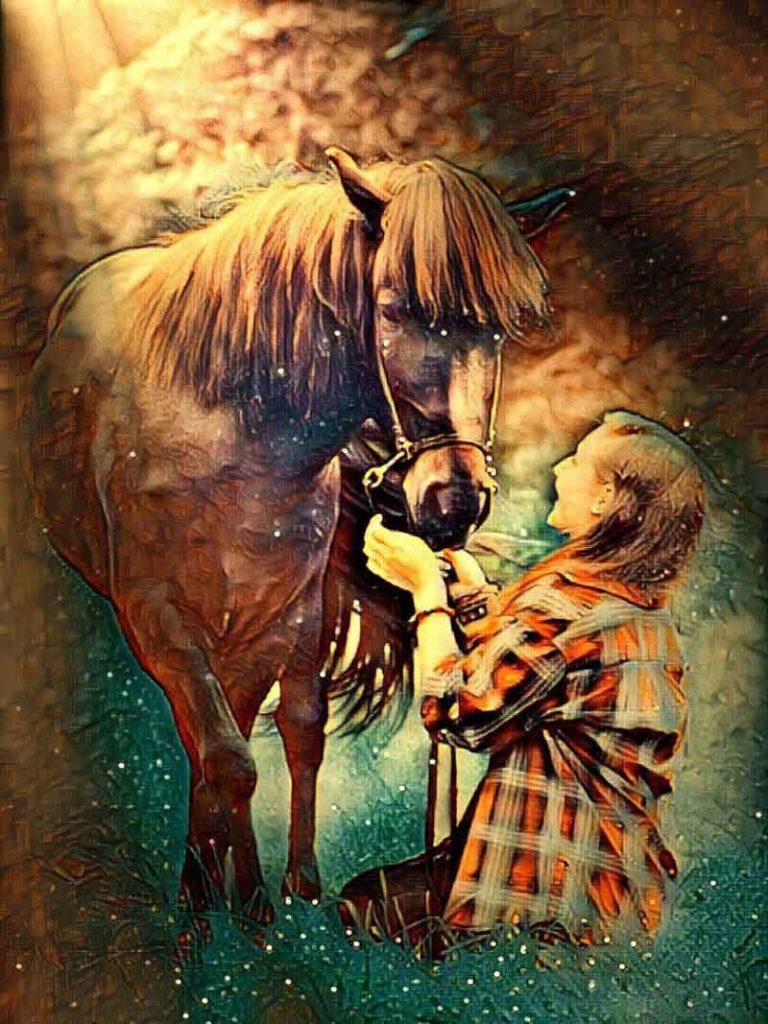 About animals that can talk and evil trolls: a fairy tale written by a child – but not only for children!

With this fairy tale, Marie won two flights to Iceland at the age of 11 in the writing competition of the Icehorse 2008

It was winter in Iceland. A thick layer of snow lay on the roofs of the houses and hardly anyone dared to go outside. But suddenly you could see a small figure. She was hurrying away from the village.

At the same time, in one of the houses, a child’s voice cried out loud: “Mama! Daddy! Laila is gone! She put a letter on the kitchen table. Listen to this:

Please don’t worry about me.

Do not try to find me, as you do not know the way through the snow.

“What are we going to do?”, a hysterical female voice followed.

“We should listen to her. We wouldn’t find her in this snow anyway. Besides, her tracks have probably been covered by new snow by now”, a male voice decided.

“But Anja, darling! Ferdinand…”, the woman’s voice returned worried. “But if you think so”, she finally relented hesitantly, but her concern was unmistakable.

Laila knew exactly what she wanted. She wanted to go to the horses, who always retreated far from the village where she lived during winter. They were the most beautiful horses she had ever seen. When they began to gallop, to tölt or pace, their long manes blew in the wind. They had no fear of wind and weather – they were unique!

Laila wanted to see them. She’s always gone to them. In spring, summer and autumn. Always at times when nobody would miss her. But she had never been to them in winter, because at that time of year someone would always miss her. This year, however, she hadn’t cared. She had left a note. It had to be enough.

There they were. The Icelandic horses. Laila whistled through her teeth. The horses lifted their heads, they knew her well. As she walked towards the horses, they came towards her. “Drellir!”, he had already reached her. “Well, you sleepyhead”. She had given him that name because it just fit perfectly! Drellir was the senior. He had a thick, bright mane and a fluffy coat, a little lighter than a brown one, but not yet as bright as a chestnut. He was beautiful – but also always very sleepy. That’s why Laila had given him the name Drellir. Sleepyhead.

Next came Litla. The little one. She was small and petite. Litla was a pinto mare. She was dreamy and sometimes tripped over her own feet. Laila greeted her too. After that, one by one, the other horses came: Ofsi, the spirited, impetuous stallion of the herd, Ósk, who looked as if she had come out of a fairytale land, and finally Jaki, a magnificent gray.

All the horses from this herd were beautiful. And it was always difficult for Laila to choose one of them to ride.

Laila swung herself onto her back. Without saddle and without bridle. She didn’t need all that on those horses. She drove Músa with her voice and off she went. She went in tölt across the snowy hills and meadows. The whole herd ran after them. Músa was allowed to lead the way. Laila closed her eyes. She had never flown before, but it felt exactly like that.

After a while, Músa turned around and brought Laila back to the place where she had found the herd.

Músa spoke to Laila! – And Laila suddenly began to understand the horses!

Músa thanked her for coming. Now she also heard Jaki, Ósk, Ofsi, Litla, Drellir and all the other horses that Laila had named. Everyone thanked her.

Laila was speechless. Never in her life had she been able to understand horses. And now it just happened.

But the news the bird gave them was not good news!

The trolls would attack them. Laila had not believed in them until now. But this news sent an icy shiver down her spine. It was said that the trolls would destroy all good. And that they would succeed. But it also meant that there was a rescue. A human child would suddenly understand the animal and mythical world. For there was only one thing the trolls feared, the human children. This human had to find a stone. A beautiful stone that is not found everywhere, and this stone had to please the horses. All of them. With this stone, the child could conjure a ring of goodness. Wherever the good beings went, the evil beings would have to go. But if only one of the horses concealed that he or she did not like the stone, the spell would not work and all good beings would have to obey the evil forever.

“Laila, you understand what I’m saying?” Drellir pulled her out of her thoughts. Laila, who was still quite confused by what the bird had just explained to her, replied: “Of course I understand you! Is that something special?” ” Yes, of course it’s special! Don’t you know the prophecy of the mythical world? “A man cub must…” “Yes, I do know it. Do you think I am this child?” Laila interrupted Drellir. “Who else? There is only one human child who possesses that gift. It’s you! Please find the stone and…”

But by then Laila was already holding a stone in her hand. It looked a little puny and dirty. The horses shook their heads. The horses came to the same conclusion at the next stone and the next one. Laila had to look into increasingly desperate faces. But suddenly she lifted a stone, and each of the horses agreed. It was very large and had a red shimmer. In the sun, it began to glisten. It was a real gem.

A big bird came flying at them with a big book. He laid the book down on the ground, tripped a few steps backwards and looked at Laila. Laila understood and opened the book. Astonished, she looked at the empty pages, every single one, until she finally found the only page written on in the middle of the book. On it was written in squiggly script:

THE MAN CUB MUST SPEAK THIS WITH A STONE IN HER HAND:

It’s all over with this stone!

Good and evil is never united.

It must dwell in its dark holes!

WHEN THE CHILD HAS SPOKEN, THE ICELAND HORSES HAVE TO DO THE SAME! WHEN THIS HAS HAPPENED, ALL GOOD BEINGS WILL SPEAK THIS FORMULA AGAIN, TOGETHER WITH THE CHILD.

Then, it will be over!

That’s exactly how they did it. Not a second too soon! Because just at the moment the good beings had finished the magic formula, the trolls jumped out of the forest. They came closer and closer until one of them hit something right in front of Litla’s front hooves. All the other Trolls also bumped into something you couldn’t see until they retreated angrily. “It was the ring around the evil!” Ósk proudly pointed out. “It worked, she saved us!” Loud cheering broke out. They celebrated with Laila until she had to leave, but Laila promised she would come back soon.

At home, Laila was already expected by everyone. But she told them nothing of the evil’s attack, nothing of the horses she had heard speak. She had sworn to that.